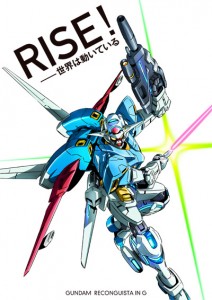 For the first time in France, a Gundam series will be simulcasted: “Gundam: Reconguista in G” available on WAKANIM.TV (French only)!

” The year is R.C. (Reguild Century) 1014. A Capital Guard trainee, whose duty is to protect a sacred orbital elevator, will meet a mysterious Mobile Suit and its pilot during a pirate attack. “

For the first time in 15 years (the broadcast of Turn A Gundam), the creator of the franchise, Yoshiyuki Tomino, comes back to direct a Gundam series. On this show, he also gathered Ken’Ichi Yoshida (Eureka Seven) and Akira Yasuda (Turn A Gundam, Overman King Gainer) around him.

People in French speaking countries will be able to watch “Gundam: Reconguista in G” on WAKANIM.TV starting on october. WAKANIM.TV provides episodes in full HD, with French subtitles and for free for one month. It is a unique occasion for French speaking Gundam fans and other people who want to know more about the Gundam franchise!

Here is the latest trailer of  “Gundam: Reconguista in G”:

5 thoughts on ““Gundam: Reconguista in G” in simulcast on WAKANIM.TV (French)”